We’ve been hard at work for the FRC, but before I catch you up, I wanted to post a little more about the FTC.

Here are a few pictures of Team A’s robot, which I haven’t talked as much about. (That’s because it was never finished.) 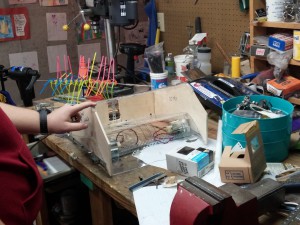 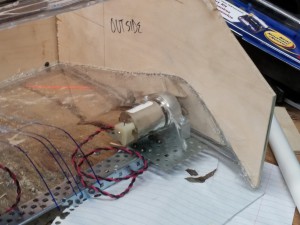 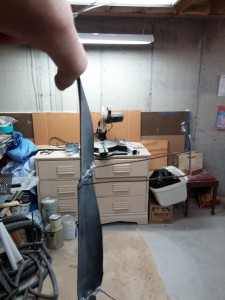 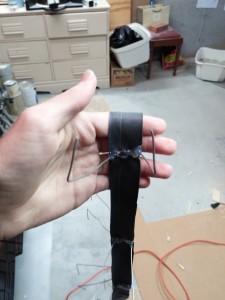 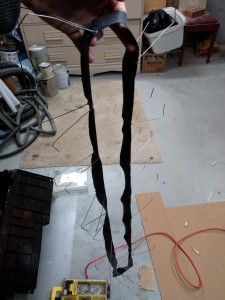 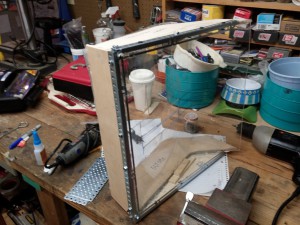 Team A had several design problems, ranging from LEGO motors that weren’t strong enough to power the street sweeper to a conveyor belt that wasn’t solid enough to pick up balls. At the competition, Team A removed the pickup and loading mechanism, and simply drove during the matches. Due to the lightweight wood and acrylic base, the bot was able to knock over the center goal ball stands easier than many of the more advanced bots!

Here’s one final clip of Team B’s bot during the design stages. We ended up using fishing line and drawer slides for the linear bearing lift, demonstrated below. We used the autonomous period of the game to lift the slides in order to start driving as soon as Tele-Op started.

Finally, here two videos from the competition itself. The first is from the Mehlville School District’s publicity department, and the second is from my website Nerd on the Street.

With our first competition this Saturday, I decided to upload some more pictures of the FTC robots. The Team A robot is still under heavy development, so this post will again be focused on Team B.

Near the beginning of the season, I installed LabView on our laptops and wired up the robot controllers. 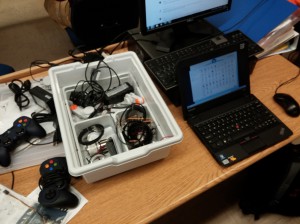 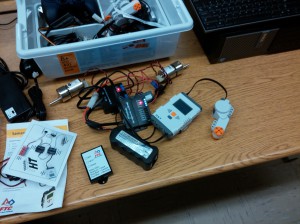 Team B built their robot’s base before they started focusing on the higher functions. 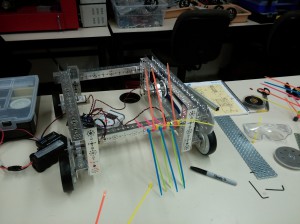 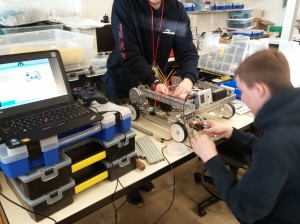 Over winter break, Brian took the bot home, and the team met at his house for several days. This is when the majority of the lift’s work was done. 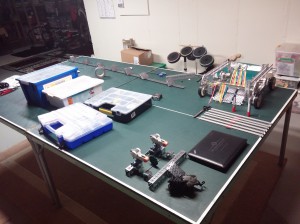 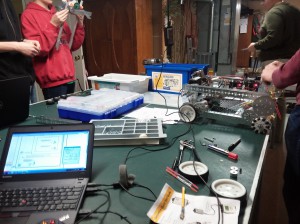 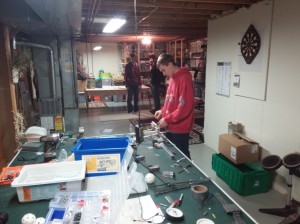 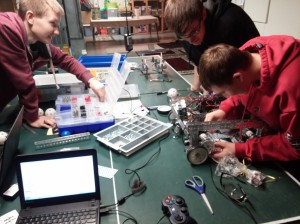 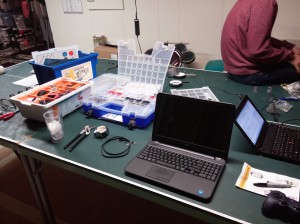 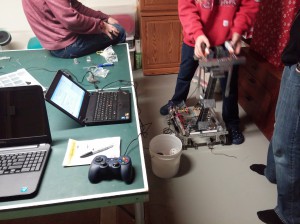 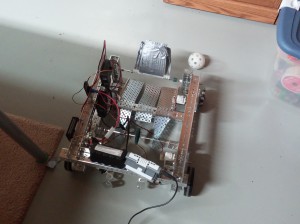 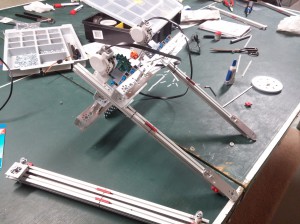 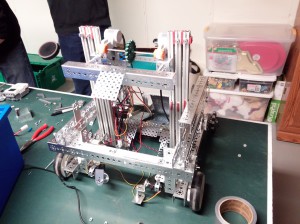 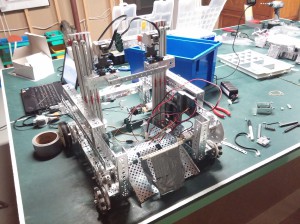 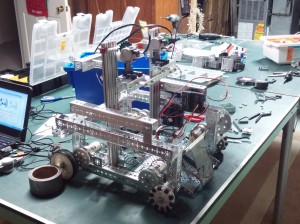 Now that the bot is nearing completion, the team has been working on final documentation, pit training, and driving practice. 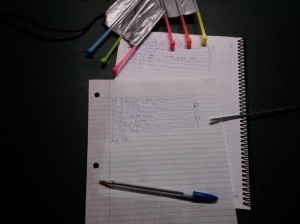 Stay tuned for a Team A update, and for the beginning of our FRC 2015 work!

Over the past month, both FTC teams have been building their robotics. In this post, we’ll look at Team B, headed by Brian Pohl. 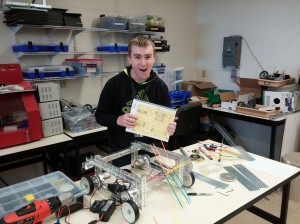 First, the team built the base of their robot, including the initial “street sweeper” to pick up balls. The first iteration of the street sweeper connected the gears of each of the robot’s wheels, inadvertently preventing the robot from being able to turn. This was resolved by cutting the street sweeper axle in half. The change did make the street sweeper less effective, and the team is still looking into improving the structure. Below you can see a video of the modified design picking up balls. The video also shows the servos mounted to the back of the bot, which will latch onto the rolling goals on the field and pull them around with the bot.

Next is a clip that shows the robot’s scoring mechanism in action. We used a plastic VEX conveyor belt connected to two axles, and rubber-supported duct tape cups carrying the balls from the base of the robot to the goal. In this video, a team member is holding the top of the belt up. Eventually, the bot will have linear bearing lifts powered by strings winding around TETRIX continuous servos. We were originally using LEGO parts for the lift, but due to several issues with sliding and staying connected, we have switched to generic drawer slides. Strings within the lift will pull the slides up to the extended position at the beginning of the match.

Both teams continue to work as the first competition approaches.

At the last few meetings, the teams have begun designing their FTC robots. These bots must be capable of picking up small balls (golf ball and baseball sized) and throwing them into tubes of varying height. Team A began by brainstorming ideas on the whiteboard: 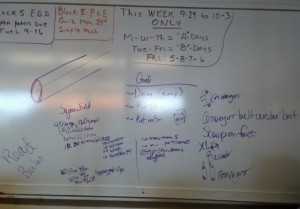 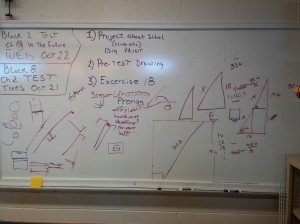 Next, we began sketching the possible designs. We are considering implementing a folding conveyor belt into our bot, so we did some math to figure out how long the pieces of the arm would have to be. 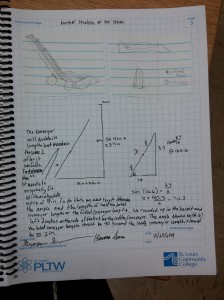 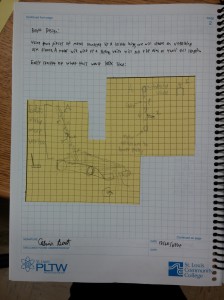 Meanwhile, Team B is formulating their design: 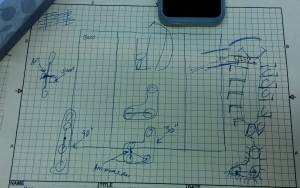 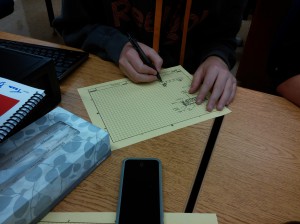 Next up will be converting these rough sketches into technical drawings that we can use to define the details of our bots.

While we are very excited to participate in the FIRST Tech Challenge, many of us would also like to go to the FIRST Robotics Competition as well. To that end, we have created an Indiegogo campaign, which you can find by clicking “Donate” or by following this link: http://igg.me/at/oakvillerobotics. This campaign is designed mainly for small businesses (and heavily involved individuals) to be able to cover part of our registration fee without paying the entire amount. You can contribute at multiple levels and we will recognize you in different ways. $100 will get your name on our website; $500 will get your company in our videos; and $1000 will get your company’s logo on the side of our robot! We have a campaign video below about why we want to go to the FRC.

If you wish to contact us outside of the campaign website, you can do so at roboticsohs@mehlvilleschooldistrict.net. We look forward to competing, and we hope that the community will help us achieve our goal!

At our meeting this past Monday, we took inventory of each club member’s focus, such as programming, building, or drawing. We then divided the club into two teams to take to FTC competitions. Oakville’s teams will develop separate robots and compete separately in competitions, but some key personnel, such as the lead builder (Brian Pohl) and the lead programmer (Jacob Kauffmann) will work with new members on both teams to teach everyone the basic skills they will need. Oakville’s 2014-2015 FTC Teams are as follows:

END_OF_DOCUMENT_TOKEN_TO_BE_REPLACED

The Oakville High School robotics team has decided to compete in the First Tech Challenge this year. However, I and several other members strongly want to participate in the First Robotics Competition. To this end, we are considering splitting a branch of the team into a separate group that would pursue higher-level builds while also accepting more responsibility for the organization. We are currently working hard to raise the funds necessary to participate in the FRC. If you want to contribute to our goal, you can visit our Indiegogo campaign by clicking on the “Donate” button at the top of the website.

I’m pleased to share that our robotics program has skyrocketed in popularity this year! Will all of the participants eager to begin working, we’re now in the process of deciding which competitions to register for this year. We are leaning towards both the FIRST Robotics Competition and the VEX Robotics Competition, and are looking into ways to raise the money needed to sign up. This website will keep our fans up-to-date with information on our progress throughout the year.