Hello! As you might have noticed, we were WAY too busy during the FRC season to post regular updates, but we were able to capture a few moments along the way.

The FRC game this year, called “Recycle Rush”, involved picking up plastic bins and stacking them on top of scoring platforms. Our team decided early on to use a forklift-like design, but we knew that it would be too difficult to slide an arm underneath the boxes. We eventually decided to use side-gripping hooks that would pull the box up using string, which would wind around a motor. Here are some pictures of the bot about four weeks in. 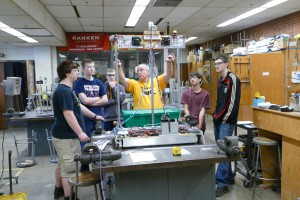 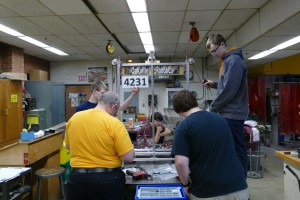 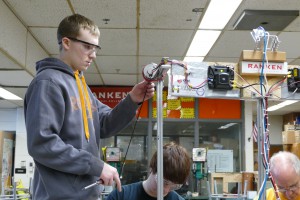 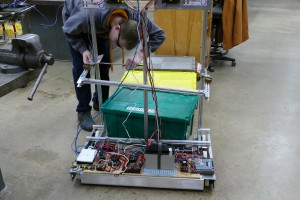 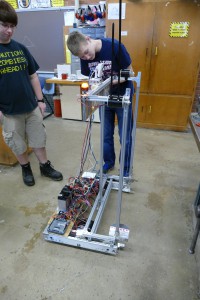 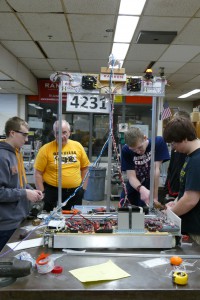 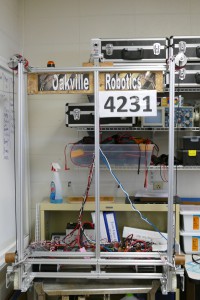 The only major change that we made after taking those pictures was replacing the black motors (which were extremely fast, but were too weak for three or more boxes and didn’t hold their position when shut off) with silver motors (which were much slower, but held the boxes in the air even when they weren’t receiving power.) The switch also allowed us to attempt adding a third top motor, since the rules place a limit on black motors but the silver motors were unlimited. However, we ended up sticking with just two motors due to time constraints.

Before we figured all of that out, me and my programming team had to wire up the electronics of the bot and attach everything to the baseboard. Again, we were moving too fast to take a lot of pictures, but here are a few shots of the almost-finished product: 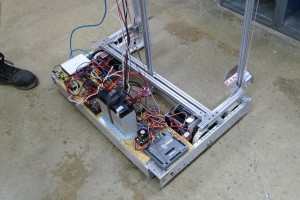 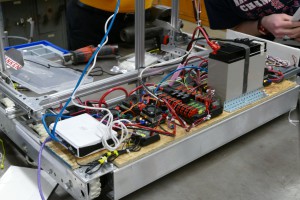 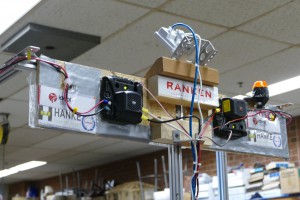 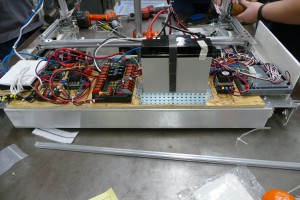 Toward the end of the built period, we put some finishing touches on the cable management, tidying up the baseboard and creating a tight bundle of cables running up to the top of the bot (but still not attached to the back pole, as that would block the sliding mechanism.) Finally, we decided to go with a tank drive control system this year, as it seemed easier to use during the FTC and we knew we would need precision steering to guide boxes into our bot. We also used a third controller (a left-over hand controller from the FTC season) for a second driver to control the lift mechanism with. With triple the controllers from our last two FRC bots, we needed a bigger driver station. I took the liberty of designing the new station myself! 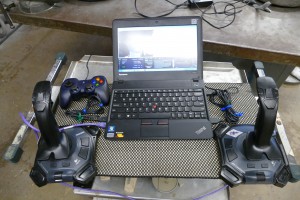 At first, I used adhesive velcro to attach the controllers and laptop to the board, but the rubber mesh worked surprisingly well at keeping things from falling off. It was lucky that we made the switch to the mesh, because when we got to the competition, the field technician deemed our laptop inadequate and made us switch to our more powerful (and larger) laptop, which we had planned on keeping in the pits to use for quick programming changes. As such, the end layout looked a bit different (less polished) than the one pictured above, but hey, that’s pretty typical for our team. The important thing is that it worked!

Here’s a video from early in the testing stage, before the switch to more powerful motors. You’ll see the box shoot up off of the table, then slow to a halt about halfway up the slide.

We also changed the black nylon(ish) cord to a thinner white string to accommodate the shorter axles on the more powerful motors.

Finally, here’s my Nerd on the Street video covering the weekend of the competition:

Overall, it was a great season for the FRC team, and a good year in general for our club. Unfortunately, our school district has decided that it might not fund our club again next year (which is sad, because they weren’t giving us any money in the first place. “Funding” means letting us in the building and keeping the lights on. We’ve always been entirely supported by fundraising and donations.) I’ll make sure to keep you all updated as to how that plays out in the fall. For now, that’s everything. 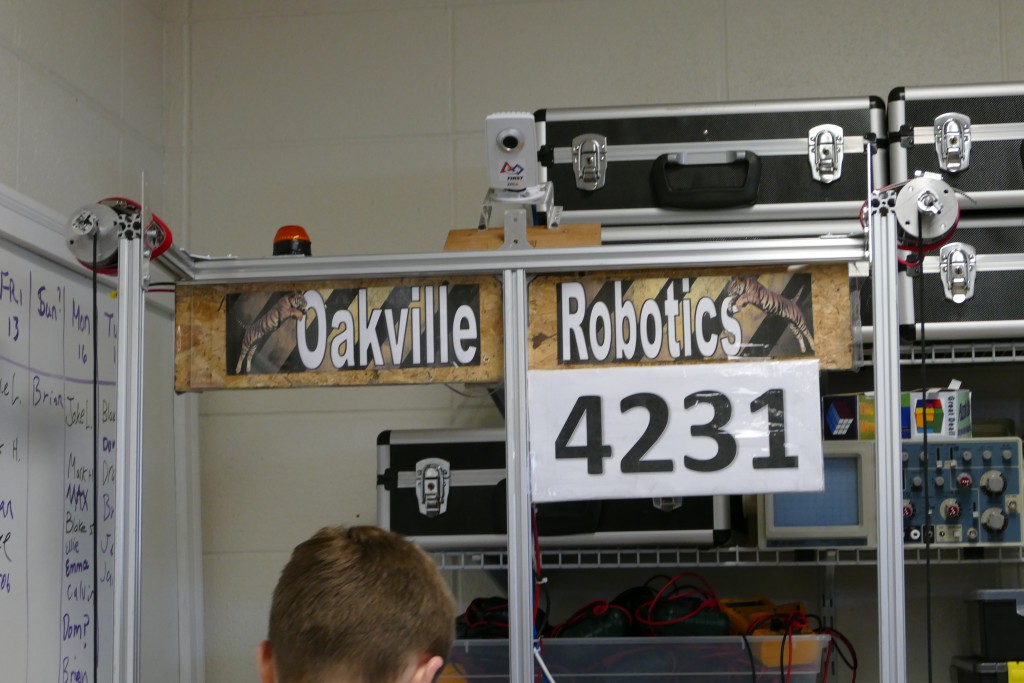 While we are very excited to participate in the FIRST Tech Challenge, many of us would also like to go to the FIRST Robotics Competition as well. To that end, we have created an Indiegogo campaign, which you can find by clicking “Donate” or by following this link: http://igg.me/at/oakvillerobotics. This campaign is designed mainly for small businesses (and heavily involved individuals) to be able to cover part of our registration fee without paying the entire amount. You can contribute at multiple levels and we will recognize you in different ways. $100 will get your name on our website; $500 will get your company in our videos; and $1000 will get your company’s logo on the side of our robot! We have a campaign video below about why we want to go to the FRC.

If you wish to contact us outside of the campaign website, you can do so at roboticsohs@mehlvilleschooldistrict.net. We look forward to competing, and we hope that the community will help us achieve our goal!