Although there hasn’t been much coverage of Team 9612, the other robotics team has made plenty of progress!

When the FTC 2015-2016 game had come out, Team 9612 went straight to work, generating ideas for a robot that could climb all three levels of the mountain while hitting the triggers along the way, as well as pull up on the top bar. Some suggestions of picking up trash (wiffle balls and cubes) were quickly dismissed, as our team wanting to focus on the more challenging part of the game instead of the seemingly simple tasks. 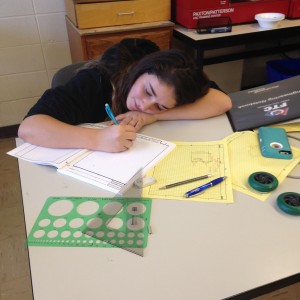 One of Team 9612’s members gathering up all the different designs into one to get an initial idea of their robot. 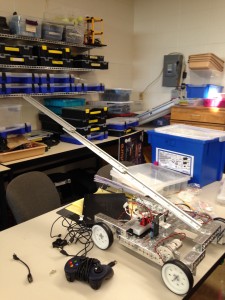 Our first idea for an arm using drawer channels

After drawing up the designs, all 8 members at the time began creating our base. The base was crafted using the directions in the PushBot Design Guide that was provided to us through the FTC website. Making sure we remained within the 16x16x16 constraints, we also began generating ideas for an arm that would grab the pullup bar and lift the robot up. Using Youtube, certain members researched arm ideas to give us inspiration for how our bot arm would work.

Our first prototype used surgical string to extend out fully, but our team could not come up with an idea to the arm to pull the robot up. Running out of time and ideas, our mentor Brian Pohl gave a suggestion. Why not focus on the trash and after the first qualifier, develop the extending arm idea further. We set to work on designing a new arm that would grasp the trash and bring it up to the first basket. Unfortunately we did not have time to program an autonomous mode for the bot. 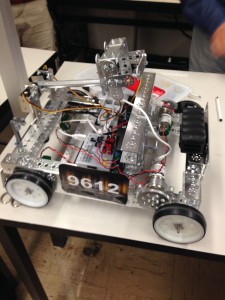 With the whole robot working properly, we went to our first FTC qualifier on December 5th, 2015, getting 16th place overall. While at the competition, our program “hiccuped” a bit, making our wheels spin without us touching the controllers. We eventually had to switch out our power distribution module with a backup one from FTC due to a defect. The gears also slipped while we were competing. To improve our bot for the next competition, we plan on taking the gears off our bot and changing to treads. Also, we will update our code for the bot and create an autonomous mode.

Stay tuned for an update from our other team.